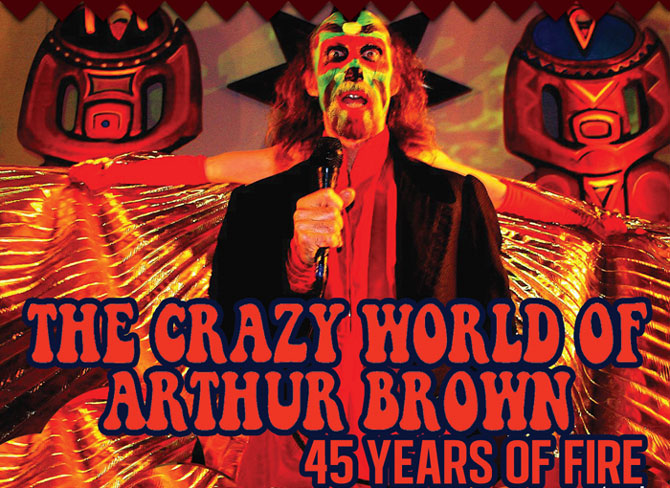 The Crazy World Of Arthur Brown on Tour!

Glasswerk is proud to present…

The Crazy World Of Arthur Brown
Plus Guests…

He is the God of Hellfire, and he brings you FIRE! No really, he does. Back in his 1968 prime, Arthur Brown really wasn’t fucking around. Watch the contemporary Top of the Pops footage of the finest Yorkshireman ever to leave the Dales, his flaming helmet burning like Osiris reincarnated in Manchester, and then try telling me that Alice Cooper – and a whole generation of latter-day shock merchants – didn’t take a large part of their blueprint from the man. The make up? Check. The demonic scream? Yep. The pioneering theatrical presentation? All present and correct. As Vince Crane, his keyboard player and band-mate so succinctly put it, “I felt compelled to work with this mad bastard, because he had a rapport with, and control of, the audience that was quite remarkable.”

With a voice like Whitby’s answer to Screaming Jay Hawkins, a dark and dangerous preoccupation with the macabre, and a natural talent for showmanship of the truly unforgettable kind, Arthur Brown should have been massive. He should have shocked and charmed audiences in equal measure, been denounced by picket lines of elderly ladies from the Highgate Women’s Institute, and accidentally set light to Madison Square Gardens before age crept in, gradually turning him into a much loved British institution, like Ozzy Osbourne or Battersea Power Station. However, Arthur’s only drawback was that he was, as Vince Crane pointed out, utterly barking mad. “His biggest downfall was the fact that he could write,” mused Vince Crane. “He buggered up his whole career by signing things without any advice.” Not much given to careful considerations of legal contracts, or the niceties of royalty payments, advance arrears or income streams, Arthur’s initial success with “Fire” did not lead on to proto-metal superstardom, but instead, despite several excellent solo albums, to years of desperate grovelling around in the music industry dirt, trying to drum up interest and sales.

The material on Strangelands dates from late 1969, and was recorded at Jabberwocky Studios in the preposterously-named Dorset town of Puddletown. Jabberwocky’s equipment and amplification gear had all been installed and built by a renegade ex-GPO traffic controller Ian Bowden, who went under the moniker of ‘Boob’. Really, you couldn’t make this shit up. Attempting to leave behind the style of the breakthrough hit “Fire,” Brown and the band were attempting to find a new direction for their music. To some extent this is evident in the wild stylistic variations of the songs that comprise Strangelands – from the uber-heavy psych Ur-metal of “Purple Airport of Love”and “All Over the Country” (on which Brown’s vibrato vocal stylings set the template for metal vocalists like Bruce Dickinson, an avowed Brown fan, over the twenty odd years that followed), to the weird kick-drum driven Sly Stone funk of “The Lord Doesn’t Want You,” to the abstract mellow Hawkbreeze of “The Planets of the Universe” – this really is all over the place: but in a glorious, ramshackled, sketchbook-of-a-genius kind of way. The fact that Brown and the band are trying things on for size in no way diminishes how great the songs sound, or how enjoyable it is to hear a true original grasping uncertainly for the future. With Strangelands, your musical cup truly runneth over.

There is, however, a second true original present on the record, a man whose potential significance to British music was sadly never fully realised, the dark matter at the heart of the Crazy World universe, drummer Drachen Theaker. Having been wildly impressed with the young Captain Beefheart when the two bands spent a week together in the south of France in 1967, Theaker had taken the Don’s primal Mojave fusion of blues, R&B and free jazz, and fused it together with his obsessive love of Bartok, to create the filius nullius that was Rustic Hinge / High Tide. As with The Deviants and The Pink Fairies, the band’s were a fairly loose proposition, and the point of genesis between The Crazy World of Arthur Brown and Rustic Hinge / High Tide, can sometimes be difficult to distinguish. Brown never sang any of the Rustic Hinge songbook, his place being latterly taken by ‘Rustic’ Rod Goodway, which many suspect was largely due to Brown feeling threatened by the creeping influence of Van Vliet.

The tracks that make up the second half of Strangelands are instrumental, falling between vocalist stools (Goodway was not summoned down to Puddletown until 1970), and feel akin to the tapes of The Magic Band practising the Trout Mask Replica material that surfaced as part of the Grow Fins box-set. On “Litmus Transformation,” “Opus Pocus” and “Crystallised Petard,” Theaker guides the band by the same star that the Captain sailed by. There is some truly awesome BBC-shot footage of Rustic Hinge playing outside at Puddletown in magic hour sunshine, all outlandish costumes and foliate faces, looking like a demented group of woodwose let loose with electric instrumentation. Theaker’s kit is augmented with dustbin lids and various car spares, and the ‘Guinness Is Good For You’ pub umbrella is just the cherry on the top.

Yet this is no mere slavish copying; on “Kinesis” the band launch into a frenzied blast which sounds entirely their own, guitars grinding and Theaker thrashing away behind the kit like a demented jazz octopus, Robert Wyatt gone to the bad. It’s incredible to think that Theaker also played with Love (yes, that Love, he obviously had a fondness for demented and God-like frontmen) and The Mothers of Invention). The final track, the majestic and melancholy “Macedonia,” showcases Theaker’s classical influence and training, the sounds of the Balkans seeping through into his visionary rock by way of his hero Bela. No-one would make music like this in Britain, or anywhere else for that matter, for a very long time indeed. A Hawk and a Hacksaw could drop this into their set and no-one would notice the join. It is a tragedy that Theaker was never afforded more time and space to write and record in his own right throughout the early part of the 1970s. I for one am convinced that the music he would have made would have been utterly idiosyncratic, innovative and outstanding. Sadly, Theaker died of a brain tumour in 1992, so these loose, disjointed fragments must unfortunately serve as his musical epitaph.

Arthur Brown’s career, however, hit a decided upswing during the 1990s. Having influenced every macabre rocker from the aforementioned Alice Cooper to Kiss to Marilyn Manson, Brown has become increasingly in-demand for guest appearances, collaborations and gigs across the world, including festivals such as Glastonbury and Wicker Man. When performing with The Pretty Things at the world live premier of SF Sorrow at the South Bank in 2001, Brown took the role of narrator. Afforded a short solo spot, Brown did what every single person in the sold-out Royal Festival Hall was hoped for: he strapped on the flaming helmet once more, set it ablaze and treated the audience to a blistering rendition of “Fire.” Not only that, but he performed a truly awe-inspiring feat of athleticism, running from the stage to the back of the auditorium using only the backs of the seats as firm footing. Not even Iggy could do that.