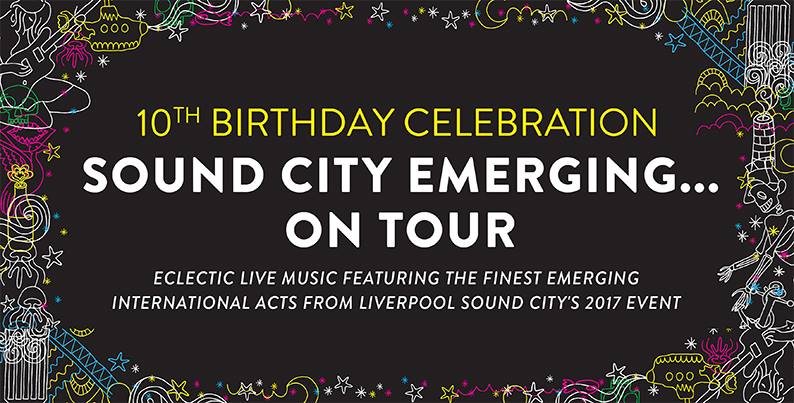 Glasswerk are excited to announce they’ve teamed up with the winners of Best Urban Festival Sound City to help create Sound City Emerging… On Tour. Four fantastic free concerts in London and Manchester uncovering emerging talent from all over the world!

The Bongo Club (Sweden):
Making their debut with the album ‘Be Careful Not to Stare’ in 2015 and making most of touring after its release, by close to 100 shows over Europe, The Bongo Club got the experience to almost anything and everything. Next up was the hit single ‘All She Said’, which gave the band airplay on tastemaker stations all over the world. 2016 has been full on as well; four shows during Eurosonic, hitting #1 on Spotify Viral Top 50 in March and a visit to cutting edge conference MUSEXPO in Los Angeles in April.

The summer was all about touring again and December 2016 the band will return to the studio to get some new masterpieces underway for early 2017. Still this is nothing complicated, it’s still just indie rock and totally ready to let it all go on any given night. Get with it on this December run!
https://www.facebook.com/TheBongoClub/

Shijo X (Italy):
The sound, always experimental and very personal, drifts away from the trip-pop atmosphrere of the second album to define a much stronger signature style. An admirable range of synth effects ranging from video game sounds to Pink Floyd inspired rattling coins was on display. Accompanied bu hip hop/jazz inspired beats and basslines of a similar ilk to BadBadNotGood and vocals that recall Lady Gaga
https://www.facebook.com/shijox/

Swiimers (Korea):
Led by MQ Cho, formerly known as UHF of which music was beloved by fans who enjoy shoegazing, dream pop music from Cocteau Twins, Slowdive to local bands like Misty Blue and Blue Dawn.
Their music can be categorised as dream pop, but some of their songs feel like they belong to other genres like synth pop or even electronica.
https://www.facebook.com/swiimers/

Wasted Johnny’s (Seoul):
A crazy power punk band from South Korea, they will stun your with your sound
https://www.facebook.com/WastedJohnnys/