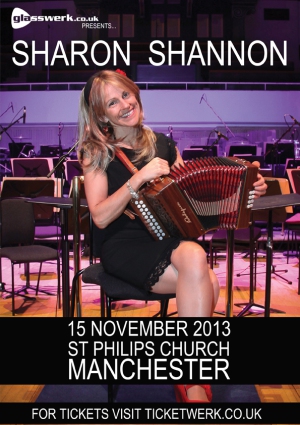 SHARON SHANNON Sharon Shannon has music at her fingertips….literally! The accordionist from Ireland has achieved legendary status throughout the world and has made the much-maligned accordion ‘cool’ in her home country. Renowned for her collaborations, not just in Irish traditional music, but through all musical genres, Hip-Hop, Cajun, Country, Classical and Rap.

Sharon has recorded and toured with a who’s who of the Irish and Global Music Industry, including Bono, Adam Clayton, Sinead O’Connor, Jackson Browne, John Prine ,Steve Earle, Mark Knopfler, The RTE Concert Orchestra, The Chieftains, The Waterboys, Willie Nelson, Nigel Kennedy, Alison Krauss and Shane MacGowan – a list that is testament to Sharon’s versatility as well as talent.

She has entertained US President Bill Clinton and Irish Presidents Robinson and MacAleese and more recently The Sultan of Brunei in Australia. Sharon records and produces her albums at her own studios ‘Poets Corner’ outside Galway in Ireland; and she owns her own record label – The Daisy Label.

The genre-defying star has had multi-platinum album sales and has had several number one albums, singles and DVDs in her home country.
A prolific composer, Sharon is currently writing an album of traditional tunes for full Concert Orchestra arrangement. She is also working on a new album with guest singers to be released in 2009 – and has just completed working on Neil Jordan film with Colin Farrell.

Sharon’s last album ‘The Galway Girl’ has gone 4 times Platinum in Ireland and the title track has won the Meteor Award for most downloaded song for the last two years. This year’s Meteor Awards honoured Sharon as the youngest ever winner of the Lifetime Achievement Award.

Sharon is currently on an Irish Tour, an intimate acoustic line up off the back of a residency in Lanzarote, a sell out Christmas Tour of Ireland and the Magners sponsored UK tour.