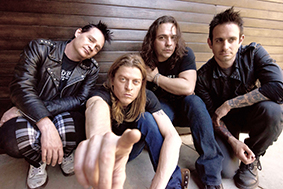 Manchester Show For Puddle Of Mudd

After achieving huge success with hits Blurry and She Hates Me, American rockers Puddle Of Mudd are back in the UK and ready to put on a show. Catch them at Gorilla Manchester this summer!

Puddle of Mudd was formed September 13, 1991 by Wes Scantlin (vocals/guitar). According to Wes, the band name was inspired by practicing next to the Missouri River levy, which always inundated the band’s practice space but never ruined their equipment because they were on the second floor. Their first album, ‘Stuck’, was released in 1994 on V&R Records. It spawned two radio singles.

In September 2014, the band released the non album single ‘Piece of the Action’. In July 2015, the band announced that they were recording their sixth studio album.