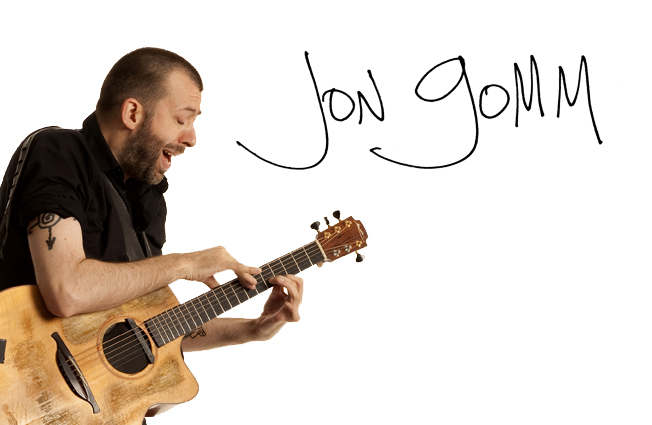 “One of the world’s most successful, gifted and inspirational guitar players” – Acoustic Magazine

“Hands down the most amazing guitarist I have ever seen!” – Tommy Lee (Motley Crue)

Leeds based singer songwriter, guitar virtuoso and Youtube viral sensation Jon Gomm is today pleased to announce a mammoth twenty nine date solo headline UK tour for September and October 2013. Following a meteoric rise to fame last year after receiving support from a certain Mr Stephen Fry on Twitter, Jon Gomm’s story is the modern embodiment of a musical, metaphorical, rags-to-riches tale that has captivated the imagination of millions of listeners.

After touring the world on the back of the success of his Passionflower video, which now stands at just over 4,249,000 views and counting, Jon is pleased to be able to return to the UK to give something back to the fans that gave his very unique take on acoustic music a voice right from the start, as well as showcase brand new material from his forthcoming album Secrets Nobody Keeps (release date TBC) that will be fan funded via a PledgeMusic campaign.

His eclectic musical style is drawn, magpie-like, from influences including Michael Hedges, The Beatles, Radiohead, Steve Vai, John Coltrane, Jimi Hendrix and a whole host more, all lovingly appreciated and expertly crafted into Gomm’s signature sound. An ambassador for the appreciation and enjoyment of all forms of music, as well as embodying the true spirit of the 21st century independent musician, things haven’t always been this good for Jon.

“It’s surreal; it’s really hard to cope with” Jon explains of his newfound notoriety “I’ve spent my life gigging, and the last 10 years doing my take on the solo singer-songwriter acoustic thing. I never cared about being in the shadows, and I fully expect to return to them one day.”

For a man who’s finally clawed his way to success after a long and rocky road of sleeping on sofas and playing in car parks in Barnsley, Gomm is still ever the rationalist and is at pains to stay connected to his roots and his fanbase at every possible opportunity, even if now his celebrity endorsements and TV appearances occasionally get in the way of doing what he still loves more than anything, which is sharing his music with the people who made this all possible; his fans.

“It’s been a crazy and amazing 12 months for me” says Jon of the upcoming tour, humble as ever “and that’s thanks to my fans here in the UK that started the snowball rolling by sharing my music far and wide, and also for supporting me at tiny gigs all over the country for the past decade. But since I got all popular all of a sudden, it seems I’ve been playing everywhere else on the planet, and I haven’t actually had time for a solo UK tour. So it’s about time all my fellow Brits got to see me play the youtube classics, and I’ve got some new stuff I really want them to hear as well, if that’s OK.”