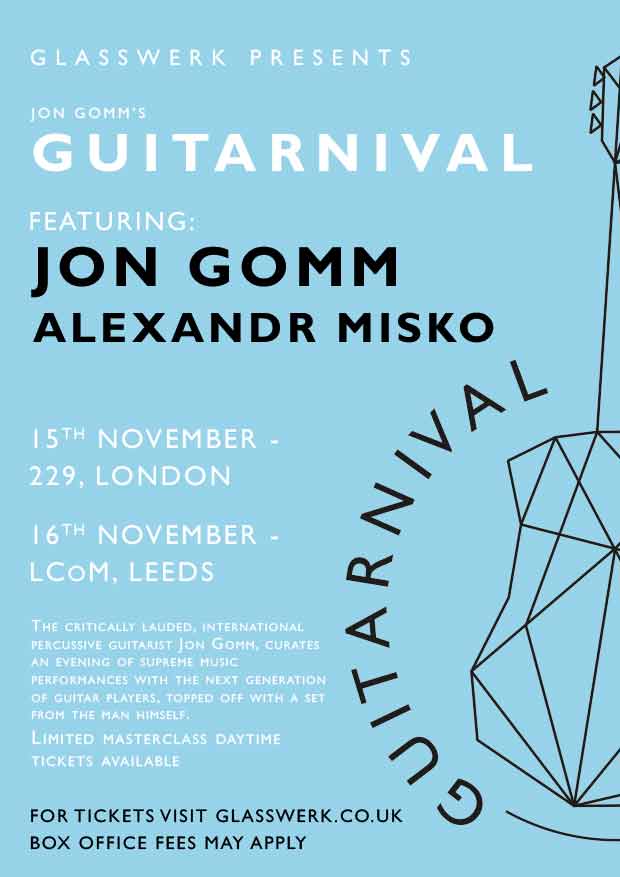 Jon Gomm presents Guitarnival. A Travelling guitar festival, highlighting new, international guitar players, and of course, a performance from the man himself, Jon Gomm. This inaugural year also features Alexandr Misko (Russia), this years winner of the Total Guitar Guitarist Of The Year Award. In support there is Zac Hobbs in London, and Jamie Ferguson in Leeds.

There is also a master class from Jon in the afternoon at the venues. (These are separate tickets to the evening performances).

Jon Gomm, based in Leeds, West Yorkshire in the UK, is an acoustic singer-songwriter with a revolutionary virtuoso guitar style, where he uses one acoustic guitar to create drum sounds, bass lines and twisting melodies all at the same time. The emphasis is still on the soulful vocals and songwriting, and his original material is influenced by everything from Robert Johnson to Radiohead.His live shows combine deeply personal performances and a natural wit, with a once seen, never forgotten two-handed guitar style, both physical and complex, producing sounds people can barely believe are coming from a humble acoustic guitar.Jon first laid his hands on a guitar at the age of two (actually it was a ukulele – his parents couldn’t find a guitar small enough). He wrote his first song at the age of six, and was soon accompanying his father, a music critic, to gigs in his hometown of Blackpool. Touring musicians would often stay at the Gomm household on the understanding Jon would get a guitar lesson, meaning he had one-to-one instruction from such blues legends as BB King and Jack Bruce of Cream.Nowadays, Jon tours worldwide. In January 2012 his song Passionflower went viral online, with the video passing 6 million hits, resulting in national TV appearances in the UK, Portugal, Holland, Brazil and Turkey.
Suddenly being catapulted from cult obscurity to mainstream acceptance has been a strange experience for someone so devoted to his craft, and Jon is an unlikely star and remains very much true to his roots in the acoustic circuit of the North of England.Jon is a truly and fiercely independent artist, with his own label and no mainstream industry support, but using mostly online social networks for promotion, he has defied the odds with a huge, truly supportive fanbase resulting in headline tours on all 5 continents, from Australia, Canada and Europe to China and South Africa and South America. His debut CD Hypertension has sold over 50,000 copies at the time of writing, and his second CD Don’t Panic sold out within 3 days of appearing on Amazon. His videos are watched tens of thousands of times within minutes of appearing on Youtube.
www.facebook.com/jongommofficial/