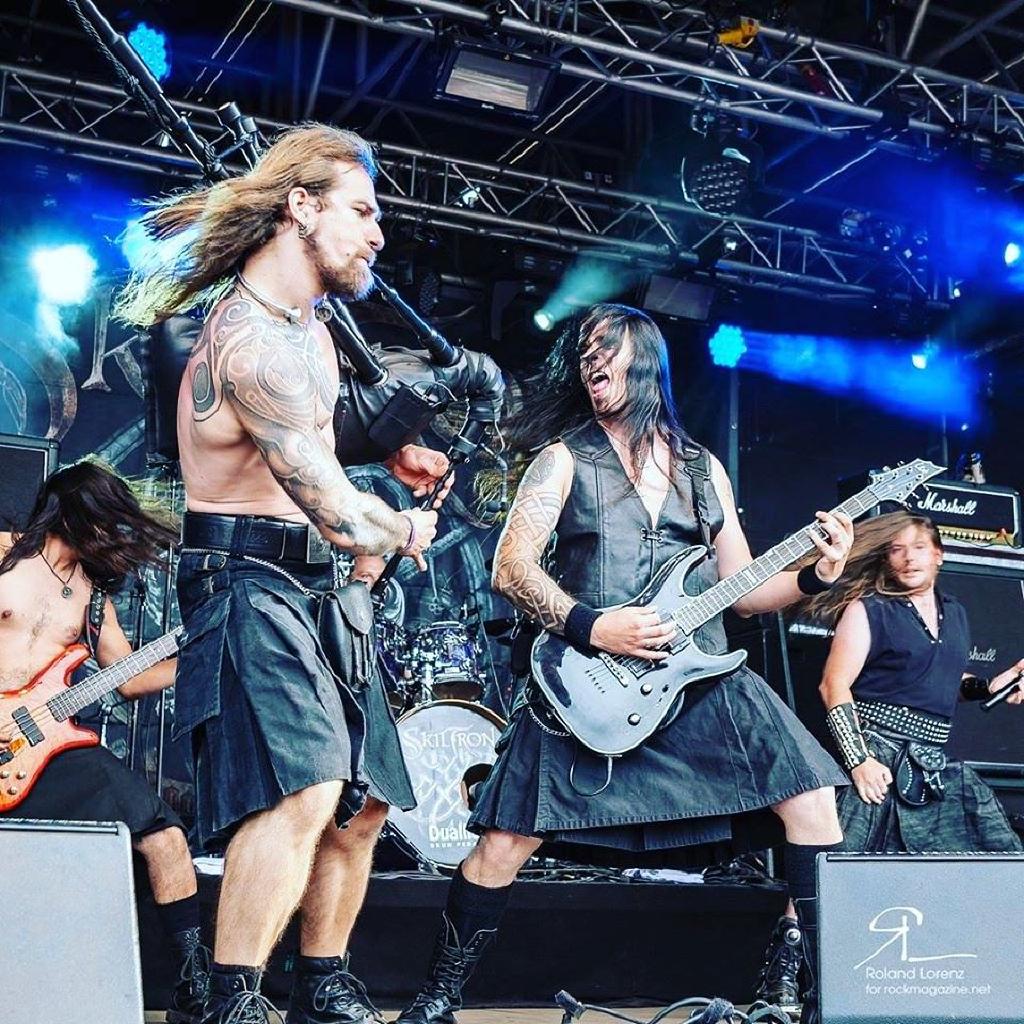 Officially founded in 2004 in Argentina, SKILTRON is the leading Folk Metal band from South America, now based in Europe.

After a 3 song demo in 2004 called 'GATHERING THE CLANS', the band released their full length debut album 'THE CLANS HAVE UNITED' (First Folk-Metal album ever released in Argentina) in 2006 through European record label UNDERGROUND SYMPHONY.

In 2008 SKILTRON released their second album 'BEHEADING THE LIARS', and two years later in 2010, their third album 'THE HIGHLAND WAY', each album continually building on the band's unique style and sound.

Most of the early gigs took place in Argentina, featuring shows with GRAVE DIGGER, IN EXTREMO, MARTIN WALKYIER and KORPIKLAANI, with whom the band shared a SOUTH AMERICAN TOUR in 2010.

In 2012 SKILTRON made their European live debut playing a UK tour with MARTIN WALKYIER (ex SABBAT & SKYCLAD) as a guest singer.

The fourth album 'INTO THE BATTLEGROUND' was released in July 2013 by the German label HELLION RECORDS, followed by a EUROPEAN TOUR playing at festivals like HEADBANGERS OPEN AIR (Germany) and BLOODSTOCK (UK), sharing stage with bands such as SLAYER, AVANTASIA, KING DIAMOND, ACCEPT, among others.

In 2014 the band played in Europe once again, featuring the festivals HORNERFEST and DONG OPEN AIR, playing together with bands like ANNIHILATOR, GRAVE DIGGER and ARCH ENEMY. Officially founded in 2004 in Argentina, SKILTRON is the leading Folk Metal band from South America, now based in Europe.

2015 was a landmark for the band as they were playing at WACKEN OPEN AIR (which also was the first time ever for an Argentinian band playing in the biggest metal festival of the world) together with JUDAS PRIEST, RUNNING WILD, SAVATAGE and many others, and also more European festivals and a UK tour in September.

The latest album ''LEGACY OF BLOOD'' was released in 2016 by TROLLZORN RECORDS and was followed by a massive European tour, playing 50 shows in 2 months in 20 countries.

In early 2017 SKILTRON played for the first time in JAPAN, sharing 3 shows with EQUILIBRIUM and SUIDAKRA.

The year 2018 kept the band again very active on touring, returning for the second time to WACKEN OPEN AIR and BLOODSTOCK FESTIVAL plus another bunch of shows over 15 countries.

In the beginning of 2019 a winter tour took place featuring shows at WACKEN WINTER NIGHTS AND CERNUNNOS PAGAN FESTIVAL together with more European dates.

Right now the band is focused on the composition of a new album to be released in early 2020, and also adding more and more shows to their schedule.