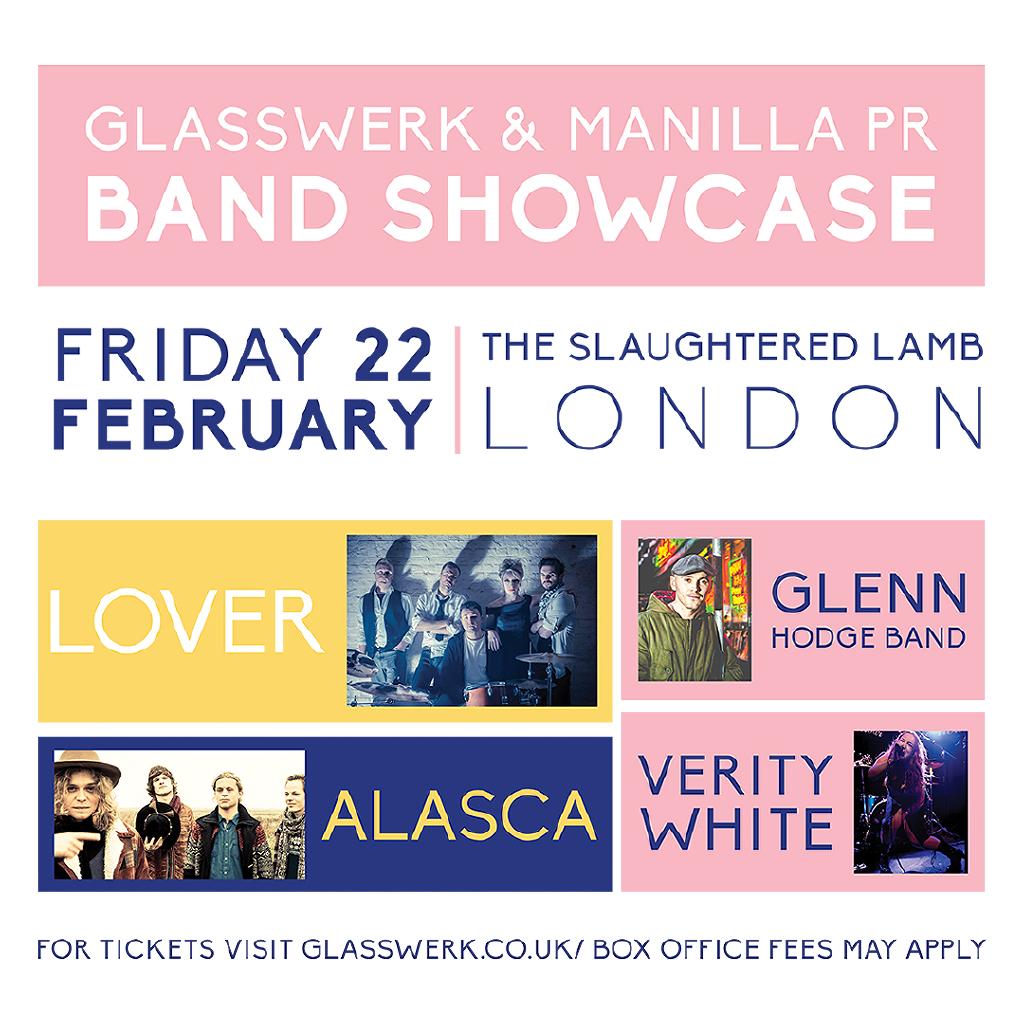 Lover played the BBC Introducing Stage at Witney Festival in 2018.

They are a band gaining momentum in the capital due to their live shows. Supported by BBC6 Music’s Steve Lamacq, Fallen Famous is the current single taken from the album Human Geography, it continues the upward path from the Londoners.

Lover are a London based band with an arty pop/rock sound. We went on tour supporting Earl Slick, Bernard Fowler and Steve Norman on the David Bowie Station to station tour around the UK last year and then supported Heaven 17 at Lytham festival and The Beat at The Garage in London, Islington.

Their debut album 'Human Geography' which is available on iTunes. Recently we have been playlisted by Steve Lamacq on his BBC radio 6 music show and our new music video 'Fallen famous' is being played in all major high street shops.

This summer the band headlined the BBC Introducing stage at the Witney music festival in Oxfordshire.

AlascA might well be one of the Netherlands’ best kept secrets. Think of an Amsterdam-based Big Star or Arthur Lee’s Love hidden, unknown like some treasure to be discovered and cherished ten to twenty years from now. But why wait that long? With its third album “Plea for Peace” the band delivers 12 instant playlist classics that combine 60’s pop elements with a straightforward 90’s attitude in a highly topical approach.

AlascA’s songwriter and frontman Frank Bond has also played many solo shows, among other things, as a support for Sinéad O’ Connor at the Sage, Gateshead, as a support act for The Young Folk and Folk Road Show on tours in the Netherlands and more recently Frank toured in Portugal.

AlascA takes you on a trip through pop's history with the psychedelic echoes of the sixties as their compass.Melancholy guitar melodies and Frank Bond's whispering voice - AlascA does not need much more to create magical moments.

Of their three records so far this one is lyrically the most edgy. Plea for Peace is a brave record.

Previous release from the album :

De Volkskrant
“There should no longer be any doubt whatsoever. AlascA makes albums of great significance'

Verity White is an exciting, emerging artist from Cheltenham UK showcasing a unique and emotional twist on female fronted rock. She takes influences from the 90s scene, twists it up with synths, strings and intricate vocal lines to create brutal yet beautiful alternative, rock music. Energetic and engaging her band puts on a compelling live show; loved by fans of female fronted rock stalwarts like Dream Wife, Halestorm, Skunk Anasie, Garbage, The Pretty Reckless and She Makes War. Verity is well recognised in the indie music scene in the U.K. and uses her strong social media presence to actively support mental health awareness, the arts and female empowerment. Her riot grrrl inspired track One Me was recently chosen by Exposure Skate to feature on the video of their 2018 championships, supporting women in skateboarding.

Fireworks magazine recently commented on Verity’s work when they reviewed her first album: “Breaking Out fits very well alongside the canon of female artists who found success in the 90s which includes such names as Garbage and PJ Harvey.... White’s debut album is quite novel and incorporates all of those influences with a more modern sound.” While Prog Radar exclaimed Verity as: “arguably one of the best female artists of her generation”. Recently, Verity and her band have been impressing gig-goers at festivals (Lechlade, FeckFest, Frogfest) and live music venues (Pizza Express Live, The Troubadour, The Islington) across the U.K., and they’re now planning their second tour in Spring 2019, to coincide with the release of their eagerly awaited second album. Verity writes with her husband, Alex White who also produces the music, and records at their studio Arpeggio Creative in Gloucestershire.

They’re joined on stage by Joe Kelly on bass and Alex McIntosh on drums.

A music man in the style of Frank Turner and according to Billy Bragg - Glenn Hodge’s music is “Really good stuff” . Glenn has previously featured on BBC Radio London.

Glenn himself says “I think of myself as a folk singer but many do not. Maybe alternative folk would better describe my bastardization of the genre? Reviewers have described my lyrics as thought provoking and my musicianship energetic. Perfect Gentleman is my fifth work to be released and is probably the closest to traditional folk music as I have been. Enjoy... please.”

In what he does we find an honesty and passion that is all too rare. This isn’t music written for the A+R department, it’s relevant, resonant and dynamic, both musically and lyrically.

Born in Ashford, Kent Glenn has made a name for himself on the London stage and has been staring things up around the country throughout the festival season. Alternating between one man shows, and collaborations with a group of musical misfits, Glenn's live performances are ever changing, but universally powerful. The live experience has been the principal aspect of Glenn's musical outlook with recordings acting as a snapshot of musical moments. And these recordings are all the stronger for it.

A mix of the thoughtful and playful is ever present in his work. Songs full of energy, catchy and emotive in equal measure showcase his unique talent. 2014 saw the release of his first single. Faces on Tables which demonstrates this combination of thought provoking lyrics, and energetic musicianship. This single release, with accompanying video whet the appetite for what was to come.

A working class ethos formed the backdrop for Hodge's EP Iconoclast. An irreverent take on the slog that is urban life for a great many Londoners can be found in 'Ignoramus' and 'C U Next tuesday', dealing with the gauntlet that is the morning commute and the intense frustration of a working life free from fulfilment.

It's not difficult to find an empathy for the themes and thoughts on display. An eloquent everyman tackling issues to which we can all relate. Whilst romance is far from absent, tired and trite romanticism is thankfully nowhere to be seen. Be it the thoughtful treatment of his own chosen Genre in 'English Folk' or the nature of personal relationships and the home life, there is an honesty and an abundance of passion on display.