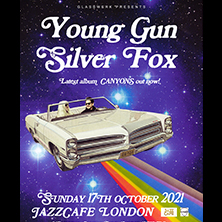 With support from James Sayer.

In this age of conformity and compromise, Platts and Lee – two of the UK’s most prolific and versatile pop music linguists – have found a niche all of their own, creating an authentic collusion/collision of styles that constantly defies boundaries and makes all of us sit up and take note. At this their first hometown gig since completing their brand new record the band will be performing songs fresh out of the studio from their newest offering, LP ‘CANYONS’. With Canyons YGSF have created something so beautiful and contemporary – and yet utterly ensconced in a post 1978, pre-1984 era – that you might find yourselves hugging each other in some kind of blissed-out state of recognition.

Young Gun Silver Fox have been compared to America, Steely Dan, Fleetwood Mac, The Doobie Brothers and even Carly Simon, Indeed, AM WAVES was once described as “the best album Hall & Oates never made” (ha!) but you can bet Donald Fagan is a major lyrical influence and “the melodies of Joni Mitchell, the fluency of Elton John and McCartney at his wackiest or shamelessly romantic” all have a special corner in YGSF world. Perhaps, however, it would be true to say that on Canyons – they are, after all, places of rare, magical beauty – they’ve hit the musical jackpot and created a sound uniquely their own.