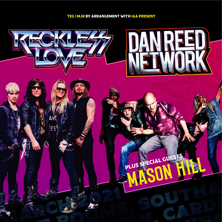 The Finnish Kings of Merry Metal, Reckless Love, burst onto the music scene with their infectious self titled debut album which took the music world by storm in 2010.

For the good part of the last decade they have toured the world, spewing out their fun loving, good time ridden big choruses with big guitars on audiences ears unashamedly, while releasing follow up albums which include the gold selling Animal Attraction (2011), Spirit (2013) and InVader (2016).

Now they’re about to throw in yet another gear and celebrate the ten year period with new music and new live tours around the world, firing things up next spring with their extensive ”Merry Metal Madness 2021” - Tour of the EU and UK.

”We can not wait to get back on the road and celebrate with our fans once again. We were supposed to get our shit together and do this tour already in 2020, however, since the whole world went to lockdown as the virus situation got severe, we decided to hold on to our hats for a little while longer and sit this one out first. It was also crucial for us, not to put our dear fans in harms way. We really want everybody to stay safe and healthy, since we all need to be in our best health as we kick this one off. It’s gonna be a ridiculously massive dose of good time. Furthermore, we also decided to spend the latter part of 2020 in studio, so that we will have some fresh new tunes to bang our heads to next year.” - Olli Herman