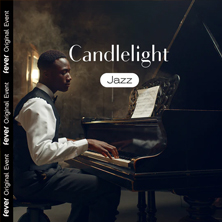 Jazz by Candlelight transforms the Liverpool’s most beautiful venues into intimate Jazz Clubs, bathing the space in candlelight to provide the perfect backdrop for some sublime jazzy sounds.

We seek out the best talent in the UK, who for this special edition will be playing a tribute to the works of Ray Charles & Marvin Gaye, and other top musicians from the period.

Marvin Gaye was equally as influential; he helped shape the sound of Motown in the 1960s, first as an in-house session player and later as a solo artist with a string of hits which earned him the nicknames "Prince of Motown" and "Prince of Soul".