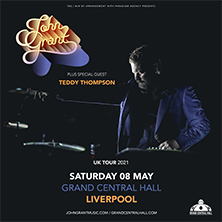 Following a successful year touring Love Is Magic, John Grant’s critically-acclaimed fourth solo album, his 2020 tour will see him performing as a duo with his long-time piano player Chris Pemberton.

For these dates, Grant will be taking a stripped-back approach, performing classics from across his career on just piano and keys.