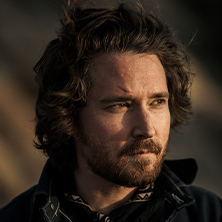 Impassioned singer and virtuosic guitar player Christopher Paul Stelling goes on tour in 2021, in support of his most recent album, Best of Luck – produced by Ben Harper.

Harper says he instantly recognised a kindred spirit in Stelling’s virtuosic finger picking and soulful delivery. “It was like finding a John Fahey or Leo Kottke that was a really great singer,” he explains.

Best Of Luck is a supremely accessible and finely crafted record that deftly merges genres. Harper, who has previously produced records by Mavis Staples, Rickie Lee Jones, The Blind Boys of Alabama and others, recruited an all-star rhythm section with Jimmy Paxson (Stevie Nicks, Dixie Chicks) on drums and upright bass player Mike Valerio (Randy Newman, LA Philharmonic) to lend a versatility and finesse. “I really believe this record is the intersection where folk and soul meet,” Harper says.

“Christopher Paul Stelling is an intense singer and lyrically has that poetic sense of mystery you can find in the songs of Bob Dylan.” – NPR Music

“The energy that this man is able to unleash through his songs and performances is unprecedented. The power and talent he beholds is a rare and beautiful thing." – No Depression