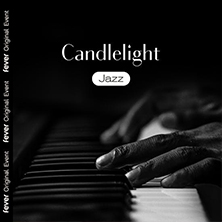 Jazz by Candlelight transforms Manchester's most beautiful venues into intimate Jazz Clubs, bathing the space in candlelight to provide the perfect backdrop for some sublime jazzy sounds. We seek out the best talent in the UK, who for this special edition will be playing a tribute to the works of Ray Charles & Nat King Cole.

Nat King Cole was equally as influential; he recorded over 100 songs that became hits on the pop charts, acted in films and on television, performed on Broadway, and even became the first African-American man to host an American television series.