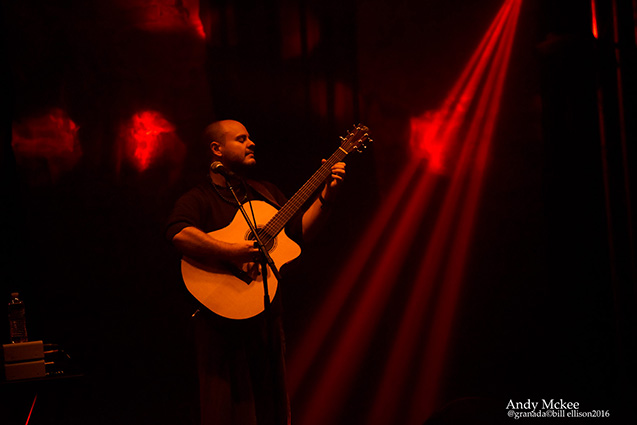 Glasswerk is proud to present YouTube phenomenon Andy McKee, Becoming one of the first major viral video’s on YouTube, Andy McKee amazed the public with his incredible compositions and ability to effortlessly sweep, pick and pluck strings. You can catch Andy McKee live on the following dates:

Andy McKee’s acoustic guitar can approximate the polyrhythmic interplay of a percussion ensemble, the harmonic sweep of a string section, the dazzling runs of a bluegrass doghouse bass-and-banjo duo, and virtually anything else his pastoral compositions and tasteful covers require. In 9 years and 5 records he’s written an oeuvre that globally inspires and intrigues music fans. His robust 200 dates-a-year tour itinerary—often spanning domestic rural to the exotically remote, from Arizona to Zimbabwe and everything in between—and his fans-first commitment, make him a worldwide ambassador for a new era in acoustic virtuosity.

Andy’s imaginative and masterful approach to the instrument and his Guitar Masters tour franchise—a tour package of edgy progressives—is helping to redefine our conception of acoustic guitar. Recently he’s garnered plum exposure touring with Dream Theater (where he played to 10,000 in Mexico City) and Eric Johnson (who made a rare acoustic showing on the Guitar Masters Tour) where he’s been able to share his unique artistry with a wide and diverse audience. Fans of sophisticated holiday music had the opportunity to hear Andy on Josh Groban’s Grammy-nominated, multi-platinum Christmas album, Noël. In December 2008 Andy was awarded Acoustic Guitar Magazine’s esteemed worldwide silver medal award for his fingerstyle approach. But most fans first exposure to Andy’s guitartistry has been through his youtube presence; the Topeka Kansas native’s 100 million cumulative youtube views puts him in the top 3 most viewed subjects on the site’s storied 7-year history. Youtube, and video culture in general, tends to have a shtick-based popularity where humorous and superficial images tend to attract the most attention. That a guy with just an acoustic guitar and no fancy camera work or special effects could resonate with that many people is inspiring in that it showed there is a powerful and widespread hunger for pure and progressive musicianship.

This year Andy will embark on 3 somewhat simultaneous tours. He will head back out with Dream Theater, hitting South Korea, Indonesia, and Japan. He will play arena shows with Prince in Australia as a special guest and directly accompany Prince through the catalog of many of his hits. His solo Pale Blue Tour will cover many parts of the planet. In all, Andy will be playing in America, Brazil, Zimbabwe, Singapore, Mexico City, France, England, Austria, Germany, and Switzerland, China, Japan, Australia, New Zealand, Southeast Asia, Greece, Spain, Portugal, Russia, and India. And Guitar Masters will reach the UK, France, Germany, and Switzerland. It’s a daunting itinerary. But Andy takes the dates day by day, with nose-to-the-grindstone D.I.Y. ethos like hauling his own gear, maintaining his own equipment, and always being accessible after shows. Andy’s shows have a homespun intimacy, hiss stage demeanor is warm and witty and he’s always generous with revealing his unique conception of the acoustic guitar to his fans.

His masterful expressionism on the guitar includes exotic tunings for rich resonance, drones for mystical ambience, complex polyrhythmic percussion, slap and pop funk bass dynamics, and a tasteful two-hand tap technique that’s unique in that it favors percussion and expansive harmonic capabilities verses show-off licks. His vision extends beyond standard instrumentation and Andy has been fortunate enough to have endorsements from a number of forward-thinking luthiers like Greenfield fanned fret guitars, Lance McCollum Baritone Guitar, and Ron Spillers Harp Guitars to build him instruments and him realize his exotic and complex musicality. His chops are compositionally- derived, his art necessitated his technique, and this approach has an emotional resonance and purity lacking in many guitar virtuosos where chops are for peacocking the audience.

Andy is a self-taught musician who grew up studying cassettes and CDs of artists as diverse as Preston Reed, Don Ross, Billy McLaughlin, and Michael Hedges, Eric Johnson, and Dream Theater. Interesting enough, his slap and pop technique is inspired by Earth Wind & Fire’s bassist Verdine White. He also absorbed the sophisticatedly accessible work of 1980s icons like Toto and Tears For Fears. His compositions and imaginative technique are an amalgamated conception of these disparate aesthetics—the chops-y journeys of guitar masters, the irreverent genius of the modern acoustic wizards, and the creative and hooky compositional and arrangement sense of good 1980s pop. Andy writes with rich impressionistic chords that often evoke beautiful country landscapes. He arranges with a keen understanding of dynamics and how songs have to feel transporting to have emotional currency. And he’s been able to confidently apply his concepts to playfully sincere renditions of pop standards such as Tears For Fears “Everybody Wants To Rule The World,” Toto’s “Africa,” and even a refreshingly rustic rendition of “Stairway To Heaven”.

He started his professional career like many musicians as a guitar teacher before his careerlaunching appearance at the venerated National Finger Style Guitar Championships in Winfield, Kansas where he was a top finalist. From that platform he went on to be a recording artist, and sticking close to his indie ideals, he’s managed to sell 50,000 records. He’s also sold thousands of hand-transcribed folio books to those who want to study his music in a more intimate and scholarly way.

Andy is currently building the Guitar Masters Tour brand, a franchise that seeks to combine technically masterful acoustic guitar performances with artist’s workshop accessibility for an engaging and participatory fan experience. His current CD/DVD package, Joyland (Razor & Tie, 2010), has a cinematic feel often conjuring up abandoned theme parks though it also features his trademark pastoral compositional style. The album is a breakthrough as he tastefully expanded his artistic palette through adding drums and cello in select places, showcasing his scoring capabilities outside the guitar-centric realm. The DVD component has an instructional bend with Andy’s trademark candor and wit as he takes the viewer through his musical journey and generously reveals tunings and techniques, bringing the guitar fan close for intimate masterclass performances of the new standards on Joyland.